Getting the Most out of Your Phase II's

Now you know how to use those Phase I's from the previous article, but what about your more adept and expensive Phase II's? How should you utilize these elite clones of the Republic army? Let's take a look and see!


Really the only big difference between Phase I's and Phase II's is that the Phase II's can take a mortar, have 2 Courage instead of 1, they come stock with a Training slot, and have Reliable, so they always start with a Surge token (which, in turn, can help them be a bit more survivable or deadly compared to Phase I's, or it could even be shared with a Phase I due to them being Clone Troopers). Since Phase II's are pretty much just a more elite Phase I squad, all the same rules apply here: don't sacrifice them; always have a plan on what you want the units to do; rarely utilize their Fire Support ability; etc. If you already have a handle on your Phase I's then just treat these veteran clones the same way. They're honestly not that different. It's also worth noting that their Courage of 2 actually makes them a decent backup commander option for when your regular Commanders bite the dust too, especially if you're running just list with one Commander and that Commander is a bit squishy (looking at you, Rex!). 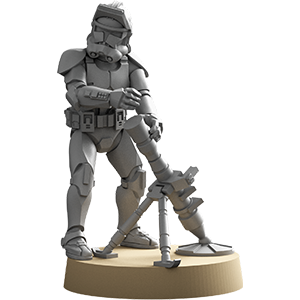 However, the main difference on how you should be playing these two units is that you should -always- take a heavy weapon, unless you just really wanted to run all Phase II's and have a supporting squad. As a more elite and capable squad than the Phase I's, it'd be a waste of their advantages to not take a heavy weapon. Currently there are only two options: Z-6 and the mortar.

Leading from the Front

Fives is back and ready to take charge of another squad (from our Phase I article). To reiterate, Fives provides whatever squad he joins an additional wound, three black dice, Coordinate: Clone Trooper, and an increased point of Courage. I'll go ahead and admit this upfront, I don't really see the point of having Fives leading a Phase II squad. He goes well with an ARC squad (not Team, but the full squad) or even giving some versatility to a Phase I squad by buffing them and making them a great Fire Support squad (which you really shouldn't do too often to begin with), but Phase II's really want their heavy weapons as they're the Clones that really help pay the bills.
A really fun and interesting thing to bring up though is that Fives will make a Phase II squad Courage 3, so if you really wanted a backup Commander for when Rex dies, you can nominate Fives' squad and he'll take over!

We got the less fun stuff out of the way first, so let's get to the real juicy builds! Echo is a great choice for a Phase II squad, definitely more so than in a Phase I squad. Echo brings his DC-15x rifle, Reliable 1, an additional wound, Critical 1, Lethal 1, two red dice and a range 1-5 weapon. The primary issue, though, is that Echo is 40 points, so now your Phase II squad is 100 points and he costs 13 and 15 points more over the Z-6 and mortar, respectively. Just like I said in the Phase I article, you have to weigh the cost-benefit here and really decide if Echo is worth it. Let me tell you though, he definitely pays for himself!
With his squad now having Reliable 2, the squad is a far more reliable, deadlier, and tanky-er squad than before. Plus, if you can give Echo an Aim each time he shoots, he'll get pierce thanks to Lethal 1 and will almost always guarantee at least one wound (not counting the rest of the squad's shots or the two Surge tokens). Plus, unlike in a Strike Team, Echo will be well protected by the amount of bodies in the squad ensuring he can keep on sniping for days. It's definitely a tough trade-off compared to the mortar and Z-6, but I honestly think it's a good choice, especially when kitted out:

Taking Phase II's with the mortar provides your standard Republic army with a very interesting advantage; suppressive. You've probably noticed by now, but the Republic is a more elite, and therefore, smaller army. Sure, you can still obtain 10+ orders, but not quite to the same degree that you can with the other factions. This means that your action economy is already starting at a disadvantage compared to other armies, but don't you fret! That's why the mortar is handy because being Suppressive means it can dish out those suppression tokens and cripple your opponent's action economy helping you even the playing field. Also packing Critical 1 means it'll actually be able to dish out some hurt too, so it's an all around handy tool, but it has two major setbacks. The first being that it's Cumbersome so you can can't move and shoot with it and the other one, which is pretty minor, is that it's range is 2-4, but these weaknesses can really be offset by giving them Recon Intel or using Rex's Scouting Party. All in all, the Phase II mortar is pretty solid without any upgrades even, but here are some fun builds:
Lastly, it's worth noting that this unit can potentially lay down three suppression tokens on two different units by splitting fire. Have the main unit fire at an enemy unit that's within their range and then have the mortar shoot another unit. If you played your cards right, you should have some Aim tokens to use (from the unit itself or nearby clones) and the Surge token to use to help score some hits. Remember, as long as you score a hit, the target unit will take a suppression token or two in the case of the mortar.

Just like with the Phase I's, this weapon will really give you the dice you need if you love rolling dice and you'll need Targeting Scopes just like with the Phase I's too. However, unlike with the Phase I's, the Z-6 this time around is actually the more expensive weapon option of the two and rightfully so because it can be an even bigger monster in the hands of the Phase II's. Already having the training slot built into this unit means it can take advantage of a few of the builds I recommended with the Phase I's without having to pay for adding another model to the unit. Because of this, the Phase II Z-6 should be your go-to unit if you want to have a decked out Z-6 squad. Plus, being Courage 2 makes them less likely to become Suppressed and keep going when you need them to. Speaking of builds, let's get to it (again, you can reference the Phase I guide for the whole list, I'm only putting the ones here that I feel are really excellent and deserve restating):

Phase II's are kind of a weird unit for me right now. As you could probably tell, I really appreciate the efficiency and firepower the Phase I's offer and Phase II's obviously do the same thing, but almost a little too similarly. This makes Phase II's feel a little awkward, especially since Phase I's also have access to four weapon types in total as well as two personnel options that aren't just a regular troop. The real unique thing Phase II's offer is a bit more reliability with Reliability and Courage 2, plus the mortar. Honestly, at this time, I definitely recommend using Phase II's with the mortar, no doubt, thing's a real powerhouse and force equalizer and they excel at taking decked out Z-6 squads for cheap compared to Phase I's (not having to purchase a Captain for training slots helps, but not having a Specialist hurts), but that's about it. If you don't need a more reliable Z-6 with a training slot or want to use the mortar, I suggest you stick with the Phase I's. Maybe some personnel upgrades in the future will help the Phase II's really shine (Republic commander making them Courage 3 and Inspire with the mortar would be rad).

All in all, the mortar is a superb piece and I think you should always try to fit it in when you can, but otherwise I don't feel Phase II's just feel weird to be so similar as Phase I's and offer less. However, don't get me wrong, that Courage 2 is exceptionally handy on your Corp units and I can see that in itself being enough to justify taking them over Phase I's. As I said before, Legion is all about action economy and ensuring your action economy with Courage 2 Corps is really helpful.
Posted by Pride of Rodina at 3:09 PM